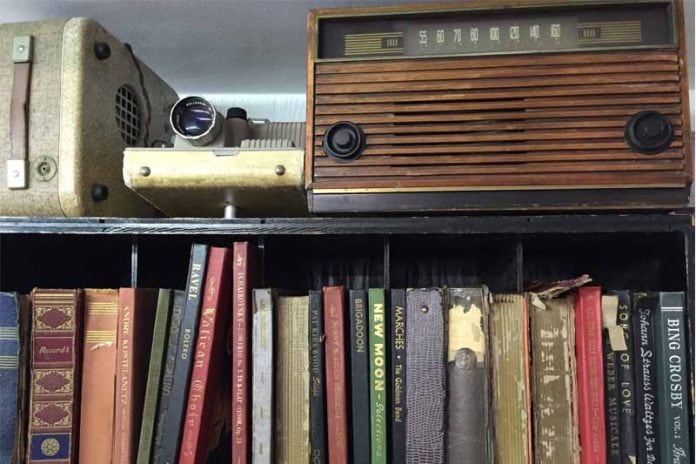 It is a sweltering June day outside. Inside the back of a record store, a young woman browses, thumbing through dusty bins and racks. The only other person in the store is behind the counter, polishing intently. He’s always polishing something, when he’s not ringing someone up; he has learned that the best way to learn about his customers is to polish and to listen. So it is never quite clear what he’s polishing, or for what purpose, but if ever you look through the storefront, you will see a small balding man with a cloth in his hand and a determined look on his face.

A few bells chime as the door opens. Another woman, about the same age as the first, cracks open the door and breezes in, calling, “Hello, Lenny!” to the man behind the counter. She is a regular here, and she knows Lenny well. A cheap purple watch adorns her left wrist.

Lenny sets down his rag. “Hello, Vee,” he answers. “What are you looking for today?”

“What do you have for me?” she challenges.

He smiles faintly. “Check the back, third aisle, middle two shelves, probably. Got some new stock in, I think you’ll like it.”

“I’d better,” she says, teasing, and Lenny picks up his rag and returns to his inscrutable polishing.

The new arrival walks to the back of the store and finds, in the third aisle, the first woman browsing.

“No, not a lot,” says the first. She is short-haired and stands quietly, one hand habitually holding onto her arm; she rubs her thumb against the inside of it when she is nervous. Her thumb rubs circles now. “I’m just getting into records, really,” she adds.

“Well, I’m Vee,” says Vee, for whom shyness is a foreign concept. “If you want any help, showing around, whatever, I’m here.”

“Becky, huh?” says Vee, rolling the name on her tongue. “Well, what’re you holding there, Becky?”

She holds it out for Vee’s inspection.

“Ooh, good choice,” says Vee, “Good choice. That one’s one of his best, it is. At least I think so. Some people prefer—here, let’s see what Lenny’s got for us—yeah, this one. Fewer tracks, though. And I like the sound better on that one you’re holding. Get that one.”

“Oi, I’m right here, no need to yell,” Lenny answers, looking up from behind the register.

He was right on that count. It was a small store.

“Put this on for us, will you?” says Vee. She moves toward the front of the store. Becky follows.

“So, how did you get into—” Vee jerks her head at the record, “him? Or records, really. They’re kind of niche.”

The music starts to play; Lenny takes up his rag again.

“I’ve got a long time,” says Vee, and Becky smiles. Her thumb stops rubbing along her arm.

The music plays as Becky begins telling the story. Vee nods along, smiles, exclaims at points. It is, actually, a long story, and the music unwinds behind them while they talk.

Imagine the sun shining on the outside of the building; imagine the record playing in the background; imagine Lenny smiling faintly as he polishes away.

Now the last song fades away as their conversation lulls.

“You were right,” says Becky. “That one is good. Thanks for recommending it. Um,” she pauses, “I’ll let you browse, if you want?”

“No, no,” says Vee, absentmindedly undoing the watch on her wrist. If you were paying close attention, you’d notice that her left palm faced inward the whole time she was doing it, the inside of her wrist close to her body. “Anything else I can show you?”

“I was going to browse a little longer, yeah,” says Becky.

“Come on back, then,” says Vee, and they both head back between shelves.

“And, Becky?” she adds, a few beats later, and swallows. “Maybe after we’re done, you want to go, I don’t know, get coffee or something?”

Becky glances down. The remnants of a rectangular temporary tattoo, red and orange and yellow, streaks of green and blue and flecks of purple, show on Vee’s wrist.

Becky meets her eyes with a ghost of a smile.