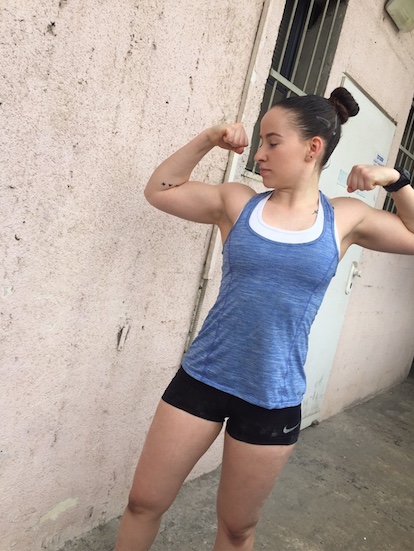 I was born a feminist. While others might disagree, I firmly believe that all women are born with a sense of feminism inside them, and that to achieve equality, they must let it grow into a way of life.

My Beliefs
Feminism has always been a huge part of me. From the moment I was born, my mother instilled in me feminist values. Even as a young girl, I was taught that power lies within me, that I am a warrior, and that no matter the circumstances, I should never feel inferior. I was taught to face whatever obstacles I might encounter. Growing up, my mother showed me what feminism looks like. I embraced, cultivated, and now embody her values as a proud woman who lives her life fighting and advocating for the ideals of feminism, from studying the establishment of the suffrage movement to fighting for women’s rights in sports, education, public service, and the economy. Women have the right to be recognized. I have always known that women are just as strong as men: I know they are warriors who won’t go down without a fight, and history proves it. Through the ages, women all around the world have been oppressed and held back by males who prevented them from advancing and becoming successful in most fields.

My Experiences
As a Jewish teenage girl living in Israel, dealing with chauvinism has become a way of life. I’ve been affected by sexism both as a female athlete and as a female soldier. As an athlete, I always knew I had one goal: to compete in the Olympics. I always loved all kinds of sports, but I eventually found my place in the world of track and field as a 400 meter hurdles runner. I have worked hard, trained every day, and pushed myself to the limits, but I have never received the same amount of support as the male athletes competing in the same field. I think that the lack of support prevented me from advancing and improving.

I started my journey as a professional athlete when I was 15 years old. I joined a track club located next to my hometown of Tel-Aviv. My coach saw the potential within me and said that with hard work, devotion, and perseverance I could become one of the greatest 400 meter hurdles runners this country had seen in a while.

Unfortunately, things didn’t go as planned. I suffered several injuries and had to quit track and field, but I knew I would never give up sports completely. Then, I discovered the world of CrossFit. I started lifting weights and got back in shape. I am really content and proud of myself, but that hasn’t prevented people from judging and criticizing me. They’ve told me that I’m too muscular, that my appearance is too manly, that a woman shouldn’t lift heavy weights, that it might hurt my fertility, and that I should probably find something more useful and appropriate to do with my spare time.

I’m not the only one. When it comes to sports, males have the upper hand. From a very young age, we are taught that girls are not as strong, not as fast, and not as athletic as boys. We’re taught that the right place for boys is on the soccer field, while the right place for girls is in art and dance classes. When a girl asks to join the boys’ game, she is met with laughter and teasing.

Things weren’t easier as a female soldier. In Israel, everyone between the ages of 18-21 is obligated to take off their civilian clothes, put on a uniform, and protect the country as an Israel Defense Forces (IDF) soldier. While the military service is a mandatory requirement for both boys and girls, the majority of boys are expected to become combat soldiers, while girls are expected to become secretaries and clerks. Female soldiers are considered to be weaker than male soldiers: it is assumed that female soldiers can’t shoot a target and can’t operate heavy machinery or load rockets onto battleships. In reality, things are the other way around.

Today, more teenage girls are joining the combat forces than ever, so equality seems like it should be achievable. Unfortunately, that’s not actually the case. There is still a limit on the combat positions in which female soldiers can serve. Most of the positions have been deemed too physically demanding for female soldiers based on equations of body mass, muscle type, bone density, and other physiological attributes. However, these equations do not take into account women’s intellect, determination, desire to serve, or growing strength, all of which are also important factors in serving successfully. These are among the restrictions that prevent women from reaching the highest ranks of the IDF. Yet the success of the increasing number of women serving in combat units is proving those speculations wrong. That’s what we women do; we prove sexist speculations wrong. We prove that being a woman is not an obstacle but a strength.

Join Me
I myself have never been able to find out what precisely feminism is: I only know that people call me a feminist whenever I express sentiments that differentiate me from a doormat. — Rebecca West

So ladies…are you with me?