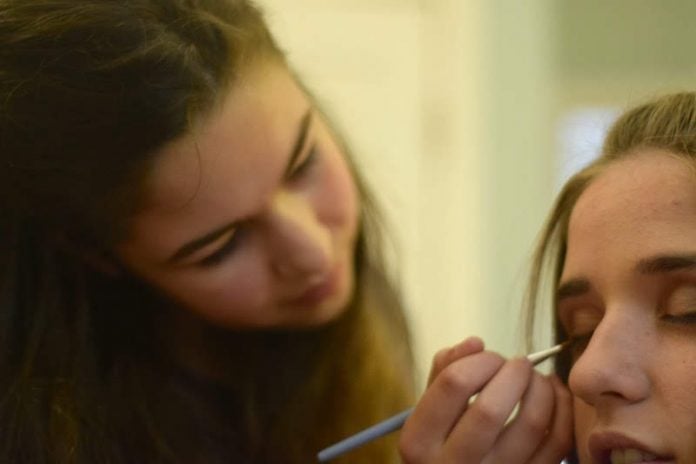 1.
My daughter’s nose is crooked, the stark roundness of it tilting to the right. It refuses to be lean, and small, and button, and pretty, and desirable (all things that don’t equal Jewish). When she was a baby, it was so miniscule, barely there, like a little pea just resting below her eyes (beautiful, lucky). And as the years went on and she grew out of her shirts and into her bras, her nose was still…cute. That’s the word—cute.

But now, middle school has come around and as she walks with a flip phone bouncing next to her lunch, it’s beginning to grow. Today it happened. Today she became a Jewish woman. No, it wasn’t her bat mitzvah. It was a moment all of us Jewish women go through; a moment I thought she would never have to experience. Today a girl asked my daughter why her nose was so sooo big.

I tell her not to take it as an insult. I say all the things parents are supposed to say, all the things my own mother said to me: that she is beautiful and the mean girl is just insecure. But when I stroke her hair, my fingers catching between her curls, I can’t help but notice how round it had gotten. How could I have not noticed? The bump of it highlighted with pimples and blackheads. Nostrils the size of enlarged almonds roughly inhaling air as she cries and blows her nose into some toilet paper. (Can you even call that lump a nose?)

“You’re beautiful,” I repeat to her. And she is. (Most of her.) She truly is. She is my daughter. How could I not think she is beautiful? But her nose is Jewish. (Also known as ugly.) I want to turn to God and ask the same question the middle school bully asked (the same question I used to ask myself): Why is (was) her (my) nose so big?

2.
The average cost of rhinoplasty is $5,350. With that money, she could buy 1,682 pounds of kosher chicken breast or cross the George Washington Bridge 366 times. She could fly to Australia five times or buy 56 pairs of Burberry socks. She could buy 2,140 bagels with cream cheese or 3,566 bagels with butter. She could buy the first edition of Harry Potter and The Sorcerer’s Stone or buy six new iPhones. Or she could invest $5,350 into her college savings. But who would do that?

Let that sink in.

She can spend that on a lot. Or she can go into a white office and have an old white man with belly-fat stretching his white button-up shirt draw dashes over her chin, her eyes, and her nose. And watch him sniffle as he says, “Don’t you worry. We can fix this,” as if there is a goblin growing beneath her eyes. $5,350 and he’ll sandpaper away the bump between the bridge of her nose and nostrils. He’ll scrape that bump away.
That bump.

The one her great-grandmother carried from Poland to the Garment District. The one her grandma had as she baked her famous brisket. The one her mom had until she was 17, until she decided the constant hum of kike was enough. Until she chose to sit in the chair and have a different ugly man un-Jew her.

The average cost of rhinoplasty is $5,350, and though she is cheap like the stereotype says, she coughs it up. She lets the man reshape her, reform her into something else. And after two weeks of a bandage hiding this man-made creation, she finally peels it off and is greeted with a slim, straight nose. There is no bump or history in its cartilage. It is not beautiful. She did not think it would be beautiful. But, at least now she doesn’t look like a Jew. At least now she is safe.

3.
Should You Get a Nose Job? Find Out with Just Six Simple Questions!

If you answered mostly A: NO! You are stunning, girl! Nothing about you needs to change! The 21st century is all about self-love and self-empowerment. You are a #girlboss! You are beautiful and don’t need to change for a man. The fact that you would even take this quiz is preposterous! You are not a girl; you are a WOMAN! Now go out and strut it to the world.

If you answered mostly B: YES! You already knew the answer before you took this quiz. While you may be a pretty girl with kind eyes, luscious hair, and a dashing personality, there is one not-so-small thing holding back all the boys from falling in love with you: your nose. Think of a nose job not as erasing your people’s history, but as elevating yourself to the next and more superior level. A nose job is a move for you. And don’t worry if you’re stingy—it’s pretty inexpensive. A nose job will do you wonders! It will bring you safety, beauty, success, and maybe that cute blond boy’s number.

If you answered mostly C: NO! (ish). So far, you are in the clear. You are beautiful and don’t need to change at all, girl. But, as time happens and we begin to grow (yada yada yada), certain things may start becoming too much for your contour palette. When that tragic time comes, come back to this quiz. Till then, because it’s 2021, and we are all about living in the present—you are beautiful! Let’s just hope you stay that way.

4.
Deborah sits beneath the date palm tree.
The orange enclosed seeds hang above her, hiding the moon that limbos with her between Bethel and Ramah.
Barak and his men come back with harsh voices and bruised bodies.
Sisera has escaped! You are no prophet! You lie!
But Deborah just sits beneath the date palm and waits.
And though the stars are out, the heat of the desert brings dollops of sweat dripping down her hooked nose.

A clean tent pin gently dangles between Yael’s thumb and pointer finger.
She greets the sleeping Sisera, the enemy commander, with its tip meeting his temple.
Yael can smell the milk he accidentally just drank, the scent of it seeps into her wide, keen nostrils.
She hammers the pin, and there is no yelp.
He dies before he can scream.
He could not smell what he was drinking.
It was milk that put him to sleep, not the water he asked for.

Sisera has died at the hands of a woman just as God and I have said, Deborah proclaims.
The men kneel before her as the women have kneeled before them so often.
And while the truth may be clear in the mind of Barak and his soldiers,
Deborah still sits beneath the date palm tree to see if the world and the future will honor her and Yael, as they so rightfully deserve.

5.
In a New York City living room, a print of Deborah hangs in a golden frame.
Her arm is reaching out. the ruby shawl drapes across her.
Curly brown hair tangled with the wind.
Dark, strong eyes.
Deborah the Prophetess, the plaque says.
But that can’t be her.
Her nose is too slender, too straight, too—

In a Hungarian museum, the painting of Yael and Sisera is displayed.
She holds the pin, the hammer stopped in midair.
Sisera sleeping calmly, unaware of what a woman can do.
In every brushstroke, Yael’s power is radiating.
But that can’t be her.
Her nose is too small, too button, too—

Deborah sits beneath the date palm tree.
Her final verdict needs not be spoken aloud.
It is already in action.
Nobody will honor the Jewish woman.
The Jewish women must honor themselves.

Deborah stands up and plucks a date from the tree.
The sweet, fresh, wrinkled date skin grazes her beautiful nose.
With every bite, Deborah congratulates herself and Yael for bringing peace to the Israelites.
This is how the Jewish woman learns to love her nose.

This article was originally published on Jewish Women of Words