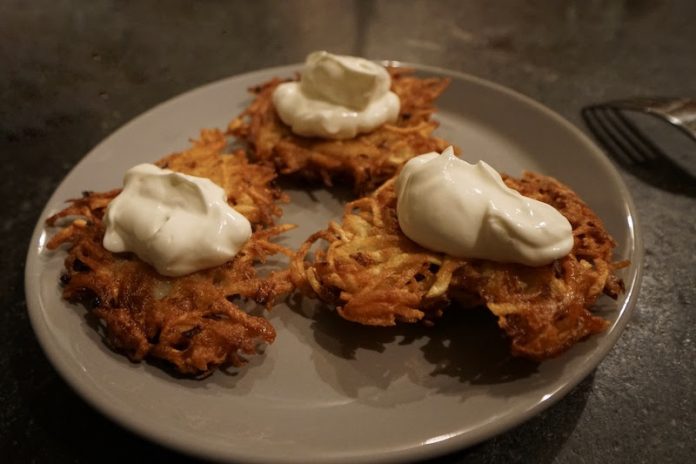 My Hebrew name sounds like Simona (Simone-ah) Yochanah bat Yoseph. I was given this name when I was around a month old. My mom would say that I was named because her parents wanted me to, but it always made me feel more Jewish, and I’m happy that I got it. I never really identified as Jewish until the end of eighth grade when I started looking into joining BBYO. The friends that I have made there are amazing, but I always feel like I’m faking around them. When I’m around them I always cover my shoulders and say that I go to synagogue way more than I actually do. It’s not like they don’t wear tank tops and go to synagogue every week, but they know that they’re Jewish, and they don’t feel like they have anything to prove. I hate when they all talk about their bat mitzvahs because I never had one, or their amazing Passover dinners, because mine was at Chipotle.

My mom’s parents were Jewish and she was raised Jewish, named, bat mitzvahed, did the hora at her wedding, the whole shabang, so to any Rabbi, I am a full Jew. Because of this, some people are still not that kind. Once I was in a musical with a girl that I am now great friends with, but she came late on a Saturday because she waited until sundown to leave her house because of Shabbat, and another girl in the show came up to her in the dressing room while I was talking to her, and asked why she was late. My friend answered politely expecting the conversation to end, but when I brought up that it was a holiday next week, the other girls asked “Well what Jewish holidays even are there?” So we gave off a list.

“What’s Passover? We gave her a brief explanation, but then made the mistake of telling her that you are not supposed to eat anything with yeast during Passover.

“What do you eat then, Jewish dirt?” Our mouths dropped to the floor and we politely told her that we just don’t eat bread products and things with yeast in order to end this terrible conversation.

As horrible as it sounds, this made me feel more Jewish. People have always talked about all the discrimination and ignorant people that they have had to face as Jews, and I was one of these people. Then I started to think, “how could someone be so ignorant,” then I realized that it’s everywhere. When I was in Girl Scouts they treated Judaism as a race and were completely insensitive to the fact that Jews are people too, and are everywhere; they can be white, Black, Latino, Asian, Indigenous, basically any ethnicity. I have been dealing with this since I can remember, I just never saw it.

Everyone is Jewish enough. It doesn’t matter who you are, how often you go to synagogue, or if you have Jewish family. The only thing that matters is that you are good enough for yourself, and your own life. Love yourself always and be proud to be Jewish because you are enough.