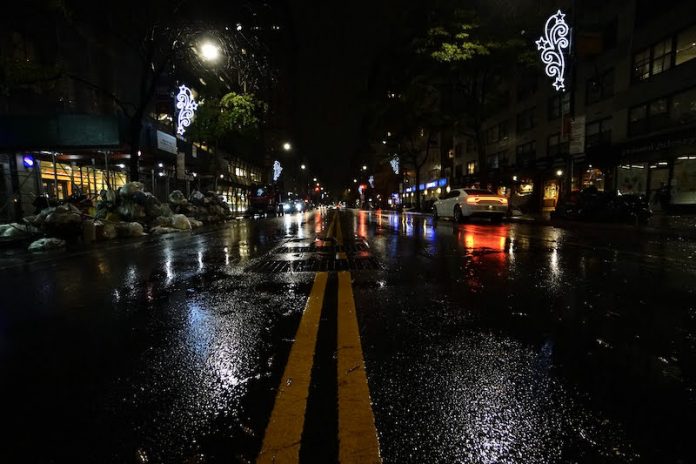 She dreams, as she always does, of lunar cycles and melancholia—of a pair of hands far too big for her own. Summer shatters at the end of August and she mourns it by sitting on a decrepit bridge, legs swinging over the water. She says she’s tempting fate, but she just wants someone to make her the most important person in their life, snap a picture of her and make it the poster of their low-budget independent film. Call it Girls Don’t Feel the Exhales of Summer Nights, after Tarantino and Scorsese, maybe. She doesn’t know anything about movies.

On Saturday she finishes de Beauvoir’s The Second Sex and goes to a party in an attic. She thinks it will be better than the basement parties, but she’s an aspiring cynic and so remarks to no one that “all parties are the same, anyways.” There’s something unbearably purple about this party in the attic. The lights, for one, and her dress, for another. She pretends not to know for whom she wore this purple dress, but her eyes find him. He looks much more normal; the skin he picked to cover his bones is the right size.

Their eyes don’t meet—they never do. She revises the movie of her life: Girls Don’t Cry at Attic Parties. Unable to match pitch with the low murmur of conversation, she crosses the room and arranges herself, all odd angles and jutting lines, in the windowsill. His eyes do not follow her. She presses her palm to the window pane.

When thunder booms, she doesn’t look up. It is lost in the music of the attic. Clouds fill the sky and the partygoers shriek louder than the thunder they cannot hear. She knows exactly what the air would feel like, if she were to open the window. She’s so small underneath the night, and she aches to feel humidity on the nape of her neck or asphalt digging into her heels. She considers jumping, but that’s too dramatic even for her, this girl who sits in windowsills at parties and reads de Beauvoir half because she wants to and half because she wants to tell someone she did. Girls in Purple Don’t Commit Suicide.

When she turns her head back to the attic, he’s gone. She sighs, and when her breath doesn’t fog up the window she sighs again. The street below is more inviting than the writhing bodies of the attic bathed in purple light. Her inner romantic beats out the aspiring cynic and she decides to leave the party now in hopes she’ll be caught in the thunderstorm on her walk home. Quiet, she descends the staircase back to the first floor and leaves through the front door.

There’s a swing seat on the porch. She’s to blame that her eyes are immediately drawn to the swing—she’s trained herself to see him in every room. For a moment she cannot move her feet. The purple party and the purple dress were worth it. She will go and sit next to him, tell him that she hates parties, too, and doesn’t know why she came to this one, but as quickly as she sees him her tunnel vision recedes. There’s another boy on the porch swing. Her boy raises his too-big hand to the other’s cheek and she’s instantly unstuck, running into the street. Girls Should’ve Known That the Boy Was Gay.

He dreamt, as he always did, of weeping willows and skinned knees—of his hands clasped between a pair far too big for them. The jobless, lazy summer passed in laughter carried down the river and kisses stolen in cul-de-sacs. He grew spoiled on being the most important person in someone else’s life. He watched no movies, simply starring in his own.

On Saturday, propped up on his elbows in the grass, he watched the boy with too-big hands kick a soccer ball to himself. If he had lived in Ancient Greece, the boy would have been a commodity. He was a commodity now.

The dreamer wore a black sweater to the attic party. He didn’t know what people wore to attic parties, or to basement parties, or to any parties at all, really, but he ended up going in a black sweater. It was too humid, though, so he took it off at some point in the interlude between leaving home and returning. He had not planned to attend the attic party (the party to end the summer with a bang! The opening event of senior year!) until the boy with the big hands and big, honest eyes had said in his quietest voice, “I want you there.” And so, of course, he reluctantly donned a black sweater and went to the party.

He took the stairs in sets of two on the way to the attic, noticing for the first time the grass stains on his shoes and the bug bites, scratched until they bled, littering his ankles and wrists. He pulled on the cuffs of his sweater and heard the material stretch across his shoulders. Upon entering the attic, he drank in the party—the dancers, bathed in an eerie purple light, and the silhouette of a girl in the windowsill. The crowd pressed toward her corner but she obstinately stared ahead. He followed her gaze to his boy, his boy with the too-big hands, and immediately softened, forgetting the jutting limbs and pointed emotions in the windowsill.

The hands in question were caught up in a flurry of movements. The dreamer caught words like “overtime” and “penalty” and smiled to himself, accustomed as he was to this kind of talk. It put him at ease, and he approached his boy without trepidation. He tapped one broad shoulder, smiling the smile his boy told him made fireflies fly “slow and sugary.”

Those big hands did not stop moving.

When his boy did not turn, every sound was sucked out of the party and multiple confused looks were thrown his way. He wished suddenly and passionately that he could draw every shadow in the attic over him like a cloak. Unable to disappear, he fled, once again taking the stairs in twos, and found refuge on the porch swing. This was the moment when his movie ended, when he regained his rightful position as a background character. He shed the black sweater in defeat and resignation.

He had forgotten, however, that most movies include moments of defeat for their main characters. The boy with the big hands barely let him wallow, joining the dreamer on the porch swing moments (he said they were moments, but they felt like hours) after he escaped from the attic. The boy with the big hands knocked his forehead up against the dreamer’s.

“Tell me you don’t hate me,” he said. The dreamer, struggling to prevent his smaller hands from coming up and holding the other boy’s face, shook his head minutely. They were alone in the backyard of some sloppy party with a thunderstorm upon them and not two inches between them. The boy with too-big hands and too-honest eyes, eyes that you see even when you close your own, framed the dreamer’s face with his hands and closed the space between them.

The rain started to fall on their perfect movie moment and neither boy noticed the girl from the windowsill searching for her plotline as she ran away.

This piece was previously published in an issue of the Beaver.